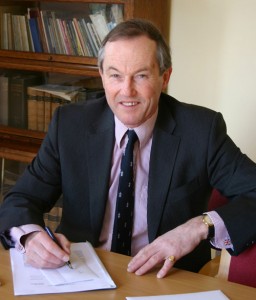 I was educated at Tonbridge School in Kent and took a law degree at Kings College, London. Having graduated in 1968 I trained with Crossman Block and Keith in Gray’s Inn London and qualified as a solicitor in February 1971.

I left London in April 1977 and joined March and Edwards in Worcester as a solicitor dealing with a wide variety of non-contentious private client work, becoming a partner in 1979.

I was admitted as a notary public in March 1984. I was appointed Registrar of the Diocese of Worcester and Legal Secretary to the Bishop of Worcester in October 1992, a position I held until August 2014. I stepped down as a partner at March and Edwards (then known as Stallard March and Edwards) in December 2012 and left that firm in April 2015 to become a consultant solicitor with Russell & Co, Solicitors of Malvern until my retirement at the end of January 2020. I carry on my notarial practice from my home.

I am a long-standing member of the Worcestershire business community and have been a notary public for over 35 years.

I live in Guarlford near Malvern & I am married with three grown-up children.